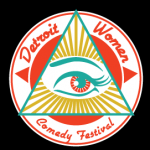 About Detroit Women of Comedy Festival 2019

The second annual Detroit Women of Comedy Festival runs from May 30-June 2, 2019 at Planet Ant Theater in Hamtramck, MI. With a goal to provide a space for diverse perspectives celebrating women in comedy.

DWCF embraces women (and their allies) from near and far to meet, greet, share and showcase their comedic talents in a welcoming and encouraging environment. The festival focuses on diversity in comedy of all kinds including improv, stand-up, sketch, musical comedy,stage readings, live podcast recordings as well as discussions and workshops.

DWCF is an inclusive event. All genders and identities are invited to perform and attend.


The Detroit Women of Comedy Festival celebrates and showcases talented female comedians and their allies (regardless of gender or identity) from Detroit, the Midwest, and beyond. Taking place on June 11-14, 2020 at Planet Ant Theater in Hamtramck, MI, the festival features improv, sketch, stand-up, as well as workshops, jams, open mics, and more.
top ↑