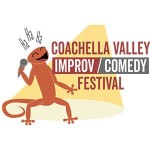 Improv and sketch groups are invited to submit an entry to perform and compete as part of the Coachella Valley Improv/Comedy Festival (formerly the Joshua Tree Improv/Comedy Festival). Join us to help celebrate the most exciting chapter for our festival as we move into Coachella Valley Repertory's newly renovated theater.
After our inaugural year at the Indio Performing Arts Center, then three glorious years at the Hi-Desert Cultural Center in Joshua Tree, we have been adopted by the highly lauded Coachella Valley Repertory in Cathedral City, California, with open arms. Coachella Valley Repertory has been voted "Best of the Valley" in the category of live theater and has a loyal following of theater-goers.
Most relevant for improv groups is the venue itself. Located in the flourishing new downtown entertainment district of Cathedral City, the playhouse is a renovated 200 seat IMAX theater, offering an intimate relationship between performers and audience in a state-of-the-art setting.
All entries are welcome and will be screened and judged by a selection committee. The committee's official selections will perform at the theater, 68510 East Palm Canyon Drive in Cathedral City (adjacent to Palm Springs) on October 23 & 24, 2021. These performances will then be judged by a live audience to determine an overall winner. The overall festival winner will be offered a paid return engagement. Last year’s overall winner was the improv duo “redDoor,” who will be headlining Saturday night and teaching a workshop.
Other events being planned for the festival include a special guest appearance by comedy legend Tom Dreesen, a variety of improv and comedy workshops, and many live performances and appearances from revered household names and emerging artists.
Submission fee is $25 by the final deadline of July 31. For more information, go to https://cvrep.org/cvicf/ or contact Jeanette Knight at cvimprovfest@cvrep.org.

The Coachella Valley Improv/Comedy Festival is a 2 day celebration of improv and comedy featuring improv, sketch groups and stand up comics, as well as workshops and networking opportunities. It is produced by Coachella Valley Repertory, a not-for-profit 501c3.
top ↑