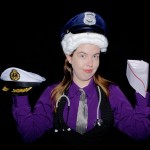 So You Want a Job


About So You Want a Job

If job interviews make you nervous, then you'll be grateful you're not one of the contestants of So You Want a Job. They don't even know what job they're all being interviewed for on this reality TV style improv show. The job is chosen by the live studio audience, who then get to vote for the winner, and see the winner's story played out before them.

"So You Want a Job" was created and developed by Australian-born and San Francisco-based improviser, Dominica Malcolm, inspired by the card game Funemployed and Donald Trump's campaign promise to "bring the jobs back" to America (in part because this show debuted in San Francisco on Inauguration Day 2017). In addition to appearing at various venues across the San Francisco Bay Area (including at the San Francisco Improv Festival and Femprovisor Fest), it has been staged at Improvaganza the Hawaii Festival of Improv, and AS IF - the Alaska State Improv Festival, and San Diego's IMPRIDE festival.

Dominica is also currently working on a documentary about improvisers, innovative improv, and improv festivals.

Comments about the casting for this show (for festival awareness, not press releases etc):

Though the format and host are consistent, the 3 guest performers are not. They may be from San Francisco, visiting improvisers, or perhaps locals in your city. If selected to perform at your festival, we can discuss how you'd like to approach this, though Dominica will generally have a cast in mind that she has asked before submitting to your festival.

See below for casts available for which festivals; if not all cast members are in the submission video, you may see additional videos below to see the other cast members.

(Unless otherwise specified, cast is based in the San Francisco Bay Area)

Watch So You Want a Job