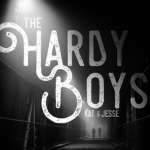 Kat Brown and Jesse Suphan come together to form the musical improv duo The Hardy Boys!

They take you on a completely improvised musical journey to discover who or what "had done it". Based on an audience suggestion these gumshoes set off on the case! Finding clues and bringing culprits to justice is what they do best in this hilarious and bold musical improv comedy!

The Hardy Boys are known for their fearlessness on stage and connection. This duo can perform musically or non-musically. We both have a variety of workshops that we teach independently and several that are co-taught.

Kat Brown is the Director of the Training Center at Finest City Improv as well as a seasoned level one teacher. She completed graduate studies in theatre at UC Santa Cruz with a focus on education and teaching performance in schools. She was featured in Finest City’s: It’s F*cking Christmas! (A Holiday Spectacular), Some Magnificent Thing! (A San Diego centric sketch show), and is now in development for A Single Lady all about falling in love. She can be seen performing with The Hardy Boys, Swim Team (all female improv), and Killer Giraffe.

Jesse Suphan is the current Assistant Artistic Director and Theater Director at Finest City Improv. Jesse studied and graduated from Finest City Improv and where he is now an instructor. He teaches all core levels, along with Musical Improv and Sketch He has studied and Second City, Groundlings, Improv Utopia and with instructors from UCB, The Annoyance, The Pack Theater and more. He was featured in ABC Family’s The Letter.
Jesse is the coordinator of the San Diego Improv Festival and has ran it for the past 3 consecutive years Jesse is also the founder, and coordinator of Impride the first ever Improv Festival focused on celebrating the contributions of LGBTQ comedians.