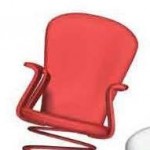 Formed in 2013 in Oklahoma City, the Chairold has evolved and matured from its first performances as a class troupe.  Some cast members have gone onto other projects since that first year when they were awarded with OKC Improv's Best New Troupe and Best Class Performance.
Recently,  The Chairold has added three accomplished improvisers to the mix, including OKC Improv Artistic Director Cristela Carrizales. With these new cast members, the troupe focuses on quick scene play, meaningful relationships and scenarios with which the audience can relate.