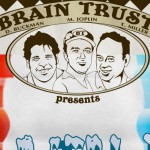 In the tradition of ZZ Top, Motorhead, Cream, Green Day and the Police, three of the most respected improvisational actors in Austin combine to form a Power Rock trio of improvised theater. Well respected in both the improv performance and theatrical stage worlds, they have, between them, 6 B. Iden Payne Award Wins and 9 nominations for their work in Austin Theater. BrianTrust combines the virtuoso performances of: Michael Joplin (Austin Chronicle's BEST OF AUSTIN Actor 2014), Troy A. Miller (Two-Time Winner of best Screenplay Awards from Austin Film Festival in both Horror and Comedy categories in 2013 and 2017) and Dave Buckman (Director and Producer for ColdTowne Theater, Austin SketchFest, The Second City, Boom Chicago and the Out of Bounds Comedy Festival).