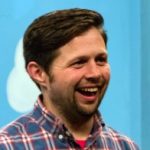 Chris George is an actor, improviser, and chemist from Chicago, IL and an apprentice of Bill Arnett.

He is a graduate of the iO, Annoyance, CSz Advanced, and Chicago Improv Studio (CIS) training centers, and is a founder of the National Comedy Theater's (NCT) Sunday Company, co-founder and former Assistant Aristic Director of Finest City Improv (FCI) (San Diego, CA), and the San Diego Improv Festival.

He is an ensemble member and the Public Affairs Director of the Odd's Bodkins Shakespeare Company; past roles include Bottom (A Midsummer Night's Dream), Antipholus of Ephesus (Comedy of Errors), Birowne (Love's Labour's Lost), and Banquo (Macbeth).