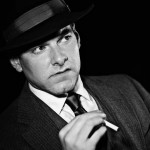 He’s been performing, coaching and teaching improvisational comedy for over 15 years, and can be seen at the Pack Theater in Hollywood in its marquee show “Big Yellow Taxi.” He is a producer and director for his longtime comedy partner's late-night talk show “The Night Cap with Stacy Rumaker” at the Virgil. He created the award-winning "The Dick & The Dame: Improv Noir," produces, directs and performs in the experimental comedy/art show "WPCK," and is a producer, director, abridger and actor for the acclaimed “Scumbag Shakespeare.”

In his free time (?) he enjoys hiking with his dogs, yoga, rye whiskey, and gaming.