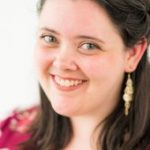 Tina Jackson is the owner of Bexar Stage, in San Antonio, TX, where she performs with her teams, Lovers & Madmen, Chernobyl, Bright Side, and the weekly marquee show, Key Party. She is, and will always be, a proud member of The (legendary, but now retired) Belmont Transfer.

In addition to performing in over two dozen improv festivals across the US & Canada, Tina is the Executive Producer & Artistic Director of Big-Little Comedy, which produces the annual Big-Little Comedy Fest, comedic film/video, and live events throughout the Midwest and Texas.

She is also the writer/director/producer of the award-winning short film, "Beauty & Deceased", and the Chicago-based sitcom, "Adventures In Failure", as well as a 5-year resident playwright for The Old Northwest Territory Chapter of The American Red Cross.