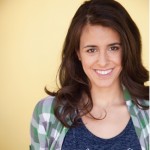 Valerie has been performing improv for a little over six years. She got her start at the National Comedy Theater in Phoenix, Arizona and then moved to Los Angeles, California. She has trained and studied physical theatre, Commedia dell'Arte, mask and clown in New York City, Italy and Bali. Her improv training comes from The National Comedy Theater Phoenix, iO West, Miles Stroth Workshops (now The Pack Theater) and the NOW Classroom. She has taught workshops to both children and adults by combining her training in theatrical physicality and improvisation. Valerie/Val is on an all-lady team called Melissa?! which has performed at improv festivals in San Diego, San Francisco, Cedar City and Detroit and they are just the coolest. She makes great vegan margarita cupcakes from scratch, rides her bike everywhere, and still jams out to Greenday's American Idiot album.

"Valerie is an amazing teacher, she created a welcoming and opening environment which allowed me to explore emotions and expand my ability to emotionally connect in an improv scene." - Maya S., Baltimore, MD

"This workshop is a must for every improviser that struggles in or with emotional scenes. By following her deceptively simple instructions, I found myself expressing and committing to emotions in a much stronger way than I have before. Plus, Valerie makes this workshop an extremely personal experience that cannot be recounted, you have to be there." - Nate P., Baltimore, MD