This last weekend I had the opportunity to perform and attend the 2nd Annual Orange County Improv Festival in Fullerton, CA put on by Spectacles Improv Engine. Their headliners this year where Ranger Danger and the Danger Ranger, King Ten, Dr. God out of iO West and Mister Town City out of UCBLA.

The festival was great, the Orange County improv scene is building a community still, but it’s even more than it was last year. Thanks to the hard work of the Spectacles Improv Engine led my Josh Nicols and Matthew Thomas. The venue is a small 99 seat theatre but most of the shows had a great crowd and an enthusiastic audience. The fest offered improvisors hotel deals and great workshops from some top instructors out in the West like Jason Pardo (King Ten/iO/Annoyance), Brian O’ Connell (iO/Dr. God) and Luis Cortez and Drew Coolidge (Ranger Danger and the Danger Ranger).

Something that was really fun this year was in the gift bags, the OC organizers made each team their own Wine label which was pretty cool (See below). It’s the small things people. And you could of course count on the parties every night for improvisors. After the show they had a second space right behind the theater with a keg of Negro Modelo. Yum!

I really enjoyed the camaraderie and welcoming nature of the Orange County improv scene. Everyone was excellent and took care of the improvisors. The highlight of the evening came as the OC Improv Festival offered Camp Improv Utopia campers (Former and Future) the chance to do an improv jam. With about 20 people we did a big group montage that was fun, but the big moment came at the end when we were taking a group picture and the post show music started playing “Proud to be an American” in true improv fashion everyone, including the audience, started singing it. It was a fun moment and a great way to close the fest.

This year only brought out teams mostly from the West. I’d hope by year three we see more teams coming from all over the country as the festival grows. 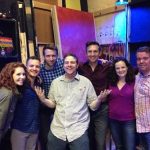 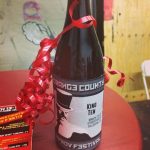 Nick is Camp Director and Founder of Improv Utopia an improv retreat for adults in California and Pennsylvania. He is also one of the founding members of the National Improv Network and performer and teacher at iO West. He has also taught workshops around the country. We are always looking for better ways to serve the community. Drop us a line and let us know what you want! To e-mail nick e-mail nick@nationalimprovnetwork.com. For more information visit: http://www.nickarmstrong.com or http://www.improvutopia.com