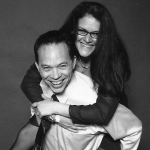 Betse Green and Bill Cernansky are longtime veterans of the Portland improv scene, but they've been married even longer--since 1989. They are both members of Portland ComedySportz. Betse is also an ensemble member of Curious Comedy Theater. Playing as a duo, for the last 15 years with their signature format, The Revolver, B&B focus on what they know best: relationships.

They have been honored with Official selection in the following improv festivals: