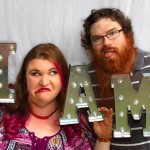 
About I AM Improv

What began as a search for a physics meet-up turned into an unexpected life & love of improv - I AM was born.

In June 2016 we had just finished up the Michael Bernoff Human Interaction Technology program, then got engaged. Mark looking to move to San Antonio, decided to look for a physics meet-up group. Mark didn't find a physics meet-up; instead he found an improv troupe out of Austin called Physic's Curse - who had resonantly played at the Alamo City Improv Theater. Seeing Alamo City Improv had open registration for their VERY FIRST Improv 101 course: The Fundamentals, Mark and Adrianne IMMEDIATELY jumped on the last two seat! Two days later, class was in session! With absolutely NO improv, theater, or acting experience what so ever, Mark and Adrianne began a journey that would lead them to amazing friendships, starting their own improv troupe - I AM Improv, both becoming cast members in Alamo City Improv limited run shows, joining other improv troupes, and so much more.

June 2017 Mark and Adrianne celebrated their one year Improversary. And debuted I AM Improv at the very theater they stumbled on to one year prier.

I AM Improv is beyond blessed to be apart of the Alamo City Improv Conservatory/Family/Theater. Thank you Alamo City Improv's Cary Farrow IV and Jeremy Zenor! You took two newbies and turned them into improvers!

Watch I AM Improv