Home / Rehearsal: Making It Work For Your Team 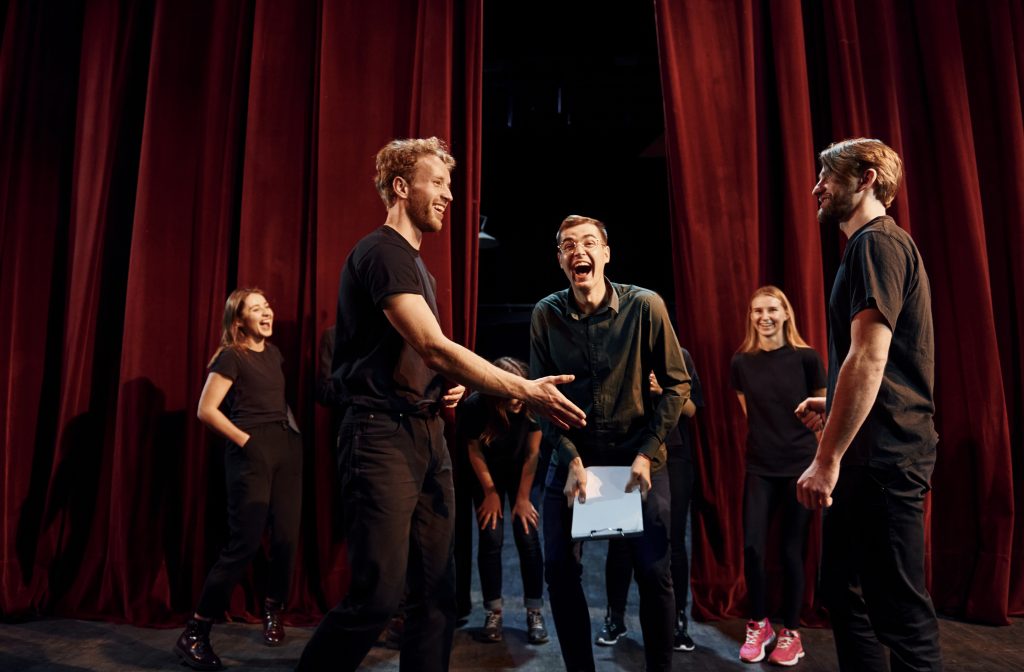 Not all rehearsal time is created equal, so it is important to learn how to make your rehearsal work for your team’s needs. Rehearsal is an inevitable part of any comedy troupe’s life (unless you’re one of those too cool for school groups that don’t rehearse). Rehearsal provides your team the ability to bond, improve upon your individual weaknesses, and learn to build that unspoken telepathy that long-running teams tend to have!

Here are some things to consider to make the most of your rehearsal time.

What are your team’s goals during rehearsal?

I’m surprised how many teams don’t have clear goals. You can’t make the most of rehearsal if your team doesn’t know what they’re working towards. Do you want to be funny? Corny? Gross and edgy? Do you want to perform for a drunk, rowdy crowd or a refined, older crowd? What does success look like for your team?

I always start with the question about goals with every class I teach and every team I coach. Otherwise, I feel like I’m doing a disservice to my students and performers! What’s the point of paying me if you’re not getting what you want? As much as I love teaching thematic, organic openings, if the group wants to do improvised Jane Austin, then we’re just wasting time.

Are the members of your team aligned with the team’s rehearsal goals?

I have been on plenty of teams where six members of the team are super excited to do a character workshop, and one person feels like it is a waste of time (it was me, I was the jerk). I’ve coached teams where we’ve tried to avoid premise-based improv, which upset the members who wanted to follow game.

If the team has a goal, but not all of the members of the team agree with that goal, then it’s going to be hard to grow as an ensemble.

Imagine if someone was writing on Saturday Night Live. Instead of pitching sketches, they pitched dramatic short films about children overcoming cyberbullying. Sure, it would be a great film. But, it’s not right for SNL. When team members would rather focus on what they want, instead of what the group has decided on, that’s a moment to reassess.

This is why it’s important for goals to be set before rehearsal begins. Then, we’re not discussing “what we should be doing,” but rather “what is the best way to get there?” In order to make the rehearsal work for your team, you have to make sure that everyone is aligned with the team’s goals.

Do you have the right coach or director to help you achieve those goals?

Oftentimes, teams are assigned a coach or director (if we’re talking about a house team at a theater) or they pick a coach or director who they are a fan of. And sometimes you just pick the person who’s available and cheapest. But their ability to get you closer to your goals is more important than their price or how many shows of theirs you’ve seen.

I know my strengths and weaknesses as a director. So, I know which teams I can help and which I can’t. Your rehearsal time is precious, so it’s important to make a business decision, not a personal decision, about who can serve your team the best.

If you have the ability to choose who leads your team, then make sure that they have a plan for your team. This will make the most of the rehearsal time you have together. Also, it’s okay to switch coaches or directors if they no longer meet the needs of the ensemble! And sometimes it’s good to try a new coach for a week, just to see what it feels like.

How will you measure success?

I would argue that learning how to measure success is the best way to ensure that you’re making the most of your rehearsal time. When you don’t have clearly stated goals, you won’t really know if you are progressing as a team.

If you can measure specific behaviors, it will give you the quantifiable data necessary to analyze your progress as a group. Here are a few examples of goals and questions to ask:

We want to be more committed in our acting.

We want to be better at listening.

We want to be the funniest team in the world.

How many times did we make the audience laugh? How long was the laughter?

We want to build a dedicated fan base.

How many people who came to the show last week returned this week? How much are our ticket sales increasing month-to-month?

We just want to goof around and have fun.

Did you goof around and have fun?

This might feel more like a research project than a comedy troupe at this point. Although, if the goal is to improvise and grow, it’s important to be able to measure whether or not that growth actually happened. Building in moments of analysis can help you and your team reorient yourselves if you start to get off-track.

What are the signs that things aren’t working?

Unfortunately, not all teams stay together forever. If this is a surprise to you, then sorry about that. Oops. But there are usually signs that a team is starting to drift apart. Here are a few things to watch out for:

Other people aren’t coming to rehearsal.

People are chronically late or cancelling at the last minute. There’s that one guy who was there for the first meeting that you’re starting to think was just part of a fever dream. Other people’s behavior can show you that the team isn’t growing.

Over time, you don’t feel like your shows are getting better.

As we’ve discussed, having those clear goals helps you know that things are working. But they also help you know that things are not working. If you’ve been rehearsing for months and still not seeing any improvement, then it’s time to shake things up. Re-evaluate as a group and check everyone’s commitment to the group goals. And maybe switch up your coach or director for a few weeks to see if that makes a difference

Rehearsal is the 2-3 hours per week that you get with your team to build whatever you’ve decided you want to work on. So, it’s your job as an ensemble to make the most of it. Having a good foundation and map for future growth will help you stay in alignment and hopefully grow into the internationally renowned ensemble that you want to be. Or the group that makes really funny fart jokes at 11pm on a Tuesday night. Whatever you want, I hope you’re the best at it.

Jeff has been an improviser since 2002 and currently performs and teaches at the Westside Comedy Theatre, Ruby LA, and Impro Theatre.
top ↑
Yes And...

Login to this site requires ssl communication.
Click here to reload the page over ssl.