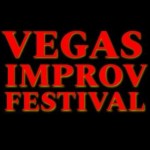 VIF was founded by Happy Hour Improv.  The troupe has been performing since 2008, training with the Second City Las Vegas.  They have performed in every theater locally and have performed internationally in places such as the Vancouver TheatreSportsâ€™ St Valetineâ€™s Day Massacre Tournament and the Upright Citizens Brigadeâ€™s Del Close Marathon.  Happy Hour's goal is to spread it's unique brand of improv as far as it will go.