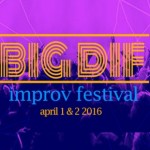 The Big DIF (Des Moines Improv Festival) is in its second year and looking to expand and bring even more great improv teams to Central Iowa this April. The Last Laugh Comedy Theater was started in April of 2014 to bring improv to Central Iowa.


About The Last Laugh Comedy Theater
The Last Laugh was launched as Anything Improv, LLC by former Second City faculty member Josh Chamberlin and his wife Stephanie, a Des Moines native, in hopes of bringing Chicago-style Improv Comedy opportunities to Des Moines. It was established in 2010 and in that time has been entertaining and training some of the most prestigious corporate clients in Iowa like Aviva USA, Bankers Trust, Belin McCormick, Businessolver, Grinnell College and Farm Bureau as well as training many individuals in improv comedy. They opened the doors of their comedy club for the public on April 1st entertaining the masses in Central Iowa.