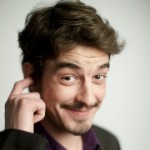 Flavien is a European cultural mix of portuguese french and swiss, living on the German border!

He is also a happy member of Ohana : The Oldest European Improvisers Project. More about this unique Improv Project in Europe in which 20 countries gather for Improv love: http://ohanaproject.eu/

Improvising and acting since 1996, he graduated in drama at Conservatoire and in Theatre at the University of Strasbourg and started his professional career in 2004. He studied Improv in France and explored Keith Johnstone and Del Close style with the best improvisers in the world never stops learning.

He created a dozen original improv formats with Théâtre de l’Oignon, including short, free and long form. All of their shows merge improv theatre and improv music.

He performs as individual, as team with Theatre de l'Oignon and in duo shows with Omar Galvan, Fabio Maccioni, Odile Cantero, Bart Van Loon and Kaisa Kokko in many English speaking international festivals all over the world.

So far he has been teaching and performing in 24 different countries, which makes him the most exported french improviser and his company the most international performing french improv professional troupe.


About his teaching experience:

Flavien's teaching is multicultural and multi influenced, he tries to give the best taste of every Improv style he met and share the signature style he created: Pure Improv while developping the format: Random, he performs with his group and taught all around.

He has been teaching Improv/drama since 2001.

He works as an Improv/drama teacher for a city theatre.

He teaches corporate workshops for team building, conflict and stress management, creativity and positivity in a professional environment.

He teaches masterclasses to professional and amateur improv groups and Improv Matches leagues across France.

He’s been part of the instructors at international Improv festivals:


He’s also been teaching workshops and masterclasses across the world:

"As a teacher Flavien shows great capacity in understanding group dynamics by listening individuals and what happens in the exercices he proposes. He's patient and actively particpates in the activities and birngs a lot of joy to it. As a person he feels like my brother,he introduced me to international improvisation, I learned from him, how to be an humble and elegant improviser." - Fabio Maccioni, Teatribu, Milano

"Workshop with Flavien was such an amazing experience for a whole group of polish improvisers. He is a very professional and supportive teacher. We felt very inspired, took risks and opened our minds to new perspectives. Full of ideas to create and have fun." - Katarzyna Chmara, Wymmy Wammy, Poland