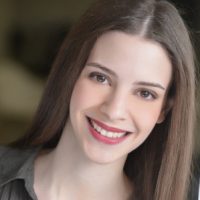 Melanie is an improviser, actor, and writer living in Orlando, Florida. She is a CEO of The Improv Network, has toured the country with a comedy show, performing improv and sketch, and also travels to improvise and teach at festivals. In Orlando, she performs in both improvised and scripted theater, sketch, and film. Melanie teaches improv classes and made-to-order corporate workshops, coaches troupes, and even uses improv at local hospitals to help better train medical professionals. She performs, hosts, and teaches at SAK Comedy Lab, and also performs with her own indie teams. Additionally, Melanie is an associate producer of the Central Florida Improv Festival.

Melanie has studied at SAK Comedy Lab, The Second City, and Camp Improv Utopia. She has been lucky enough to learn from and work with some of the best current improvisers, including Laura Hall, Armando Diaz, Mike Descoteaux, David Razowsky, Michael Gellman, Susan Messing, Carla Cackowski, Nick Armstrong, and Kevin McDonald.