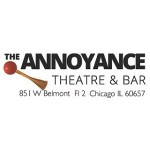 
About The Annoyance Theatre

For 25 years, The Annoyance Theatre has created some of Chicago's finest comedy.

Under the guidance of Artistic Director

Based on Napier's book Improvise. Scene From the Inside Out, the Annoyance philosophy focuses on the individual, giving students feedback and support to allow them to find and enhance their personal point of view and creative voice.